Q: What is the “Book of Abraham”?
A: The Book of Abraham is a canonized book of scripture for The Church of Jesus Christ of Latter-day Saints. The full text of the book is available here. This website contains reference information, articles, links, etc. to provide accurate information and context regarding this work.

Q: How did Joseph Smith end up with a collection of mummies and papyri?
A: Antonio Lebolo, an agent of the French Government in Egypt who was tasked with exporting Egyptian antiquities, sent a shipment of mummies and papyri from Egypt that was eventually sold in the United States. These objects were exhibited in town after town as the first large collection of Egyptian artifacts in the country. Eventually the owners of the exhibition began selling portions of it. When the exhibit worked its way to Kirtland, Ohio, Joseph Smith felt inspired to buy the papyri, but the owner would only sell them in connection with the mummies. Thus the Prophet bought a collection of four mummies, two papyrus rolls, and some other fragments of papyri for $2400 in July of 1835.

Q: How much of Joseph Smith’s papyri do we have today? 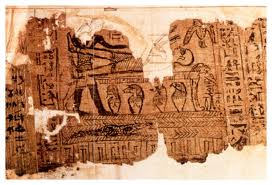 Mormon Book of Abraham papyriA: Today the Church of Jesus Christ of Latter-day Saints (sometimes mistakenly called “The Mormon Church”) has eleven fragments of papyri. Research has shown that after Joseph Smith’s death his mother maintained possession of the mummies and papyri. (Joseph Smith, according to Mormons’ view, was a prophet called of God to re-establish Christ’s original Church on the earth, after its dissolution and splintering of truth and loss of God’s authority on earth to save souls.) Upon her death, Joseph Smith’s widow promptly sold the collection to a man named Abel Combs. Combs sold most of the collection to a museum in St. Louis, which sold them to a museum in Chicago. This museum was burned in the Great Chicago Fire of 1871, and the papyri were destroyed thus destroyed. However, Combs had given some framed papyri fragments to his housekeeper. These fragments were sold by her descendants to the Metropolitan Museum of New York. The Met gave these fragments to the Church of Jesus Christ of Latter-day Saints in 1967.

Q: What is on the papyri we have today?
A: The papyrus fragments still in existence contain portions of the Book of Breathings and the Book of the Dead, two Egyptian funerary documents which are designed to help the deceased reach his or her desired station in the afterlife. One of the fragments contains the original drawing of Facsimile One in the Pearl of Great Price. This drawing is surrounded by the text of the Book of Breathings.

Q: How much papyrus was there?
A: It is impossible to determine how much papyrus Joseph Smith originally had. We know he had two rolls, one longer than the other, and a few fragments. Determining the length of the rolls has been difficult. Attempts have been made using a variety of methods. The most reliable seems to be the application of a formula used by Egyptologists who have measured various markings and widths of papyrus fragments to determine the length of the original. This formula indicates that the shorter roll would have been around 20 feet long, and the longer roll around 40 feet. This squares well with accounts that when the long scroll was unrolled it stretched the length of several rooms in the Nauvoo Mansion House. Moreover, roll that seems to have contained a Book of the Dead, which can be a fairly long document, was the shorter roll. This suggests that the long roll would have been quite long indeed.

Q: When were the papyri fragments in existence today first created?
A: Because we can identify the owner of the fragment that has Facsimile One on it, we can give it a fairly precise date. It was created in about 200 BC for an Egyptian priest in Thebes. If this fragment is a portion of the scroll which had the copy of the Book of Abraham on it, then some see a conflict between this and the statement that the Book of Abraham was written by Abraham’s own hand. The claim that it was written by Abraham’s own hand deals with the original creation of the text, meaning that Abraham wrote or dictated the original. It does not suggest that every copy was written by Abraham himself.

Q: What is the role of the Kirtland Egyptian Papers?
A: A collection of papers demonstrates that Joseph Smith and others were involved in trying to create a grammar and alphabet of the Egyptian language in connection with the papyri they had. This accords with Joseph Smith’s journal entries which speak of doing this same thing. It is impossible to tell exactly what they were trying to do. It is clear that they gave up on their attempt after a short while.

Q: How can one determine the truth about the Book of Abraham and the Joseph Smith Papyri in the face of so many points of view?
A: Given the evidence currently in existence, it is impossible to determine the source of the Book of Abraham or the process of translation engaged in by Joseph Smith. Likewise we cannot evaluate his claims to inspiration based on what we now know. Appeals to an academic setting cannot answer the question since scholars can only rely on the insufficient evidence we now have. Furthermore, since new evidence and arguments come to light monthly, it is unwise to base a conclusion on any arguments based on this incomplete set of facts. Currently the only way to determine the validity or lack of validity to Joseph Smith’s claims to inspiration is to read the text of the Book of Abraham and ask God whether or not it comes from Him.

Additional Resources:
Learn more about Mormon scripture at the official site of The Church of Jesus Christ of Latter-day Saints (inadvertently called by friends of other faiths the “Mormon Church”).

Request a free copy of the Book of Mormon.